Sleep seems to be one of the most important concerns for new parents.  With my eight children, I found that they were all different and their sleep patterns were very similar to their personalities. The temperamental ones had difficulty sleeping and are still a little difficult to deal with!  If you watch your baby closely you will start to see who they will become when they are grown.

The lack of sleep that occurs in the newborn phase is often manageable but if baby is not sleeping after the first few months sometimes there are  small things that parents can do to help.

Here at Kids and Company we have connected with our friends at Wholeplay and they suggest that the first step for  new parents is to think about safety.

When getting young children to sleep, the first step is to make sure they are in a safe sleep environment. According to the Canadian Paediatric Society, the safest place for a baby (under one-year) to sleep is in her own crib, and in the parent’s room for the first six months. This recommendation is based upon research, which identifies common risk factors associated with Sudden Infant

Death Syndrome or SIDS. According to this research, the risks for SIDS go up:

• When infants bed-share with mothers who smoke cigarettes.

• When infants bed-share with an adult who is extremely fatigued/impaired by alcohol or drugs (both legal and illegal).

• When soft bedding or pillows that cover the head are used.

• When infants sleep with caregivers on a sofa.

• When infants bed-share with adults other than their usual caregiver.

The risks for SIDS go down:

• When infants are older than 4 months-old. (Peak risk is at 2 months-old)

• When infants are placed on their backs to sleep.

• When infants are placed to sleep on firm, flat surfaces.

Despite the Canadian Paediatric Society’s recommendation, there have been no randomized controlled trials to evaluate sleeping arrangements and the risk of sudden unexpected death. This means when parents take proper precautions (i.e.- avoid the above risk-factors) bed-sharing may be perfectly safe and can be an acceptable alternative to the crib, particularly for infants who nurse throughout the night. Still, bed sharing is not for every family and many families choose to put their infants to sleep in their own cribs, in their own rooms, before the recommended age of six-months.

The Canadian Paediatric Society’s “co-sleeping” recommendation, which refers to sleeping in the same room as an infant, (as opposed to “bed-sharing,” which refers to sharing a bed with an infant), comes from research that shows infants remain in a lighter sleep state when they sleep in the same room as their parents. It is this lighter sleep state that is thought to be protective against SIDS.

Similarly, infants remain in a lighter sleep state when they are placed on their backs to sleep, instead of their tummies. This is why back sleep is recommended for infants, as opposed to tummy sleeping. 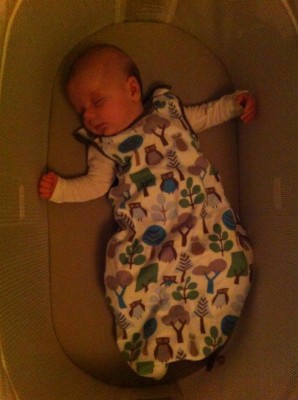