How do you know you don’t like it if you’ve never tried it?

I cringe whenever that phrase sneaks out of my mouth because I’m caught in that awkward life phase where I still remember being a kid perplexed at the things my parents said but I’ve also become a mother exasperated at the stubborn, faulty and maddening logic of a Picky Eater.

Our one-year-old isn’t the issue; in fact, if anything, Oscar is a quarter chicken dinner away from weighing the same as our three year old, Porter. Porter packs away anything remotely resembling dairy, carbohydrates, fruit or chocolate, but unfortunately we like to try and sprinkle his diet with a bit of vegetables and protein and that’s when the battle begins. 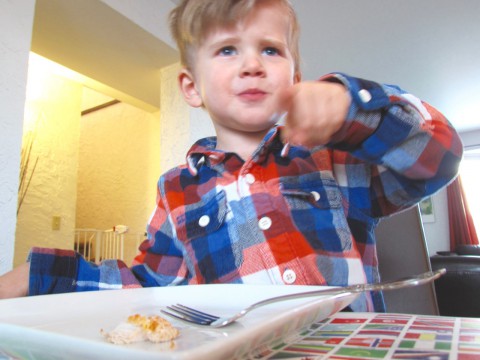 We’ve tried everything short of hooking him up to a meat and veggie IV while he sleeps. We’ve bribed and punished, taken away toys and timed him out, and just had him sit at the table until bedtime because he wouldn’t touch a thing on his plate.

It’s exhausting. Frustrating. Pointless. Recently, we started a new and easier approach, and it’s actually working. No, we don’t just make him his own meal every night. I mean, I’ve considered it, but it seems undoable in the long term: “Um, sure, we’d love to come to your dinner party but we do have one small request for our eldest son – can you please prepare an entirely separate meal with no items touching each other that is made up of plain greek yogurt and granola with honey, some white cheddar macaroni with one-third of the recipe-recommended milk and some grated two year cheddar on top, three rice crackers assembled on top of each other, and some chocolate? Any chocolate is fine, we don’t want to put you out.” 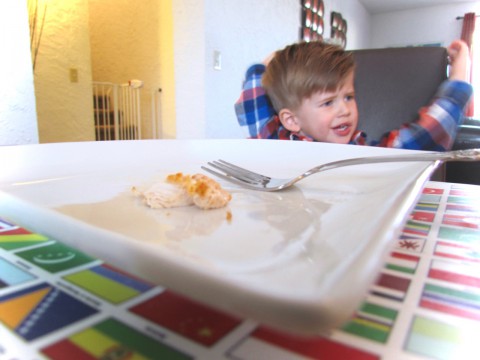 We just put it in his court to eat well. We explained why it’s important to eat healthy – I mean, what we really said was ‘meat and veggies will make you big and strong like a tyrannosaurus rex’ – and then we just gave him dinner. We serve whatever we are eating but make sure it includes at least one familiar, healthy item for him.

Okay, so occasionally he doesn’t eat much and quietly slinks away after, and occasionally he doesn’t eat at all and leaves the table shrieking in certainty that he will starve (you know, those days when suddenly the same thing he’s eaten every day for over half his life is suddenly beyond “gross”). But on the whole, he eats more than before and has even been trying new foods. Plus, we don’t spend dinnertime arguing and can concentrate on talking about our days or putting out the other various fires parents encounter EVERY. WAKING. MOMENT of our lives.

Calgary Registered Dietitian and owner of First Step Nutrition Jennifer House says this approach is empowering to both parent and child: “The child has some autonomy in rejecting foods and choosing what on their plate to explore, and the parents have the power to serve up only healthy foods. It takes time to establish the pattern, but in general you’ll find kids will eat well and try different things in their own time. Just never undermine the approach by allowing snacks or alternate items during or after dinner.” To deal with picky eating and establishing healthy habits, check out Jennifer’s e-course and consulting options or read her blog.

So this is where we are at. And you could try our approach too if your latest method of dealing with a picky eater was to take away ‘hockey guy’, prompting a two hour war that would endure into bedtime, nightmares and the following morning (not that I know anything about that kind of thing).

Melissa lives in Calgary and is the Community Marketing Manager for Kids & Company in Alberta and BC. Her vision of what she would be like as a mom was shattered three years ago when she discovered nothing ever goes as planned for parents, but laughter and community sees you through. You can reach her at msawatzky@kidsandcompany.com.

Should you jump on the Meatless Monday trend?
Back to it: 5 Ideas for Smooth Septembers
Cozy Recipes to Warm You Up This Fall