To learn about the national child care funding in Canada, please click here.

A Collection of Short Stories from a Kids & Company Family

On March 21, 2021, we learned someone in our family was a close contact of someone with Covid. So began a 29-day marathon of isolation, testing, decision-making and quarantine for our family of six (four of us ended up with it). We luckily came out unscathed and had the benefit of generous friends and family throughout: picture meal trains and virtual apple tasting events and special visits to our yard by the Easter Bunny and puzzles dropped on the porch and FaceTime calls and treats. And the most amazing support from our Kids & Company centre: the day our toddler and preschooler could return to their friends, teachers and routines will go down in history as one of my most joyful days OF ALL TIME. But I digress, here are the most notable or hilarious parts of our 29 days. 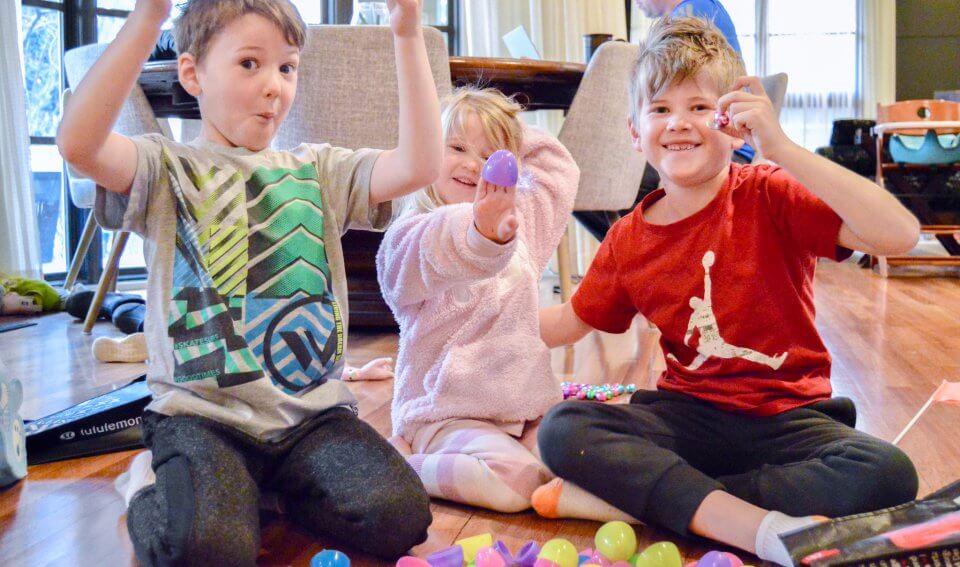 Well, looks like our daughter was a close contact and she’s going to be stuck at home (and therefore we are all kind of stuck at home). At this point we weren’t thinking she already had it, we were just taking it in that we needed to manage our schedules for 14 days without child care.

What do you do when stuck at home? If you’re my husband, you take to the backyard, shoveling snow from all over to create a large pile of snow. It stood as tall as me and was at least several children wide. What is Snow Mountain for? For climbing, skiing, jumping, king of the castle, tobogganing and to prevent our yard from being used for much of springtime. 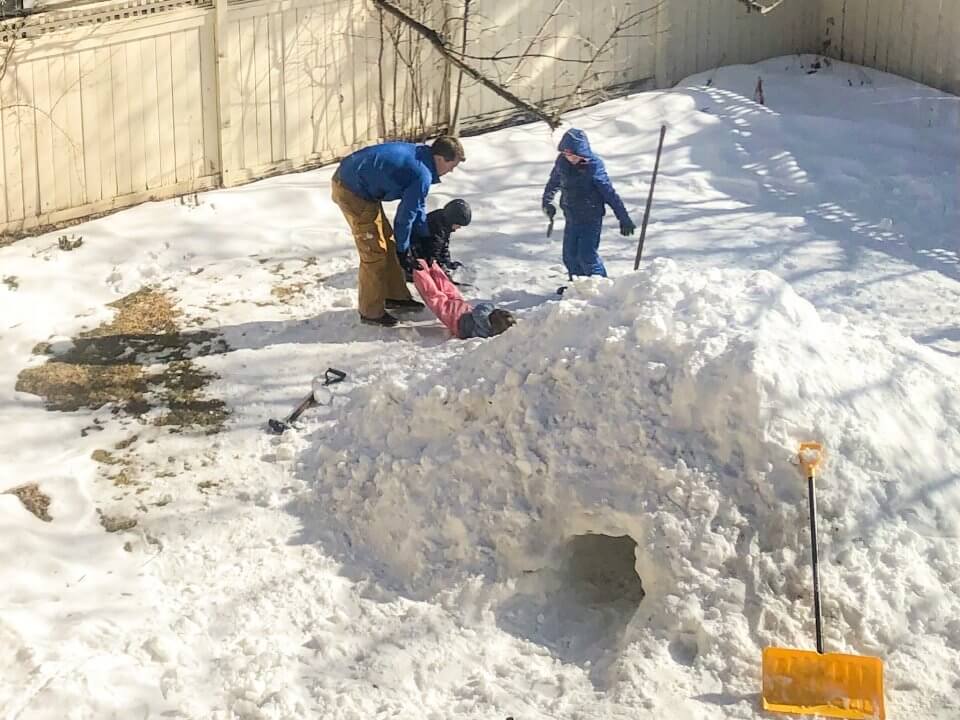 But wait, that only took a few days to build and the novelty has worn off. What now? If you’re my husband, you pull out the shovels and begin digging tunnels through the base of the mountain. Watching him struggle and scrape and shovel, lying on his back, willing little Snow Mountain to turn into a child’s adventure park, I sigh.

“Here, you should try doing it like this,” I say, assuming he’s making an easy task appear hard. But then I’m halfway under Snow Mountain, trying to tunnel through to a side that is a metre of ice away, and I’m suddenly hit with immense admiration for those who burrow, the moles and voles and gophers and husbands.

It’s a hard job, and it’s demanding to be finished. Everyone pitches in. Our older boys wrestle their way in on their bellies and scrape away snow, then wrap their arms around it while we pull them out by their feet. Our daughter is busy smoothing out the entranceways to the tunnels, making them larger and welcoming. Even toddler Tom is helping pile excavated snow into buckets to dispose of away from Snow Mountain’s underpasses.

Suddenly, we break on through to the other side! With more work and time (which we have plenty of), we unearth not one but five passageways into and out of snow mountain. After my one wriggle through, I deem it a much better fit for an eight-year-old or smaller. But still, we’re all feeling proud and the kids have loads of fun in our own backyard.

Snow Mountain (and husband), thanks for being there for us when we were stuck at home.

Day 5: Let Me Be Crushed For One Night

Early on, when it was just our three-year-old daughter who had Covid, she and I isolated separately from the four others in our house. As we packed up, I told my daughter we would have a special Mom & Mae Adventure – a phrase I would turn into our anthem over the coming days as we took her away from the Dad and brothers she’d almost never been apart from.

Three days in and the boys at home all tested again: our one-year-old Tom was positive.

My heart sank. Our time away was rendered useless. We were starting from scratch again, on the brink of at least three weeks of lockdown.

I was exhausted from days of trying to make an uninvited isolation seem fun for a preschooler. On the phone that night getting the news, thinking about the timelines, worrying about how the virus would impact our bodies, and not knowing what the next best steps were – I let frustration and emotions take over. My husband stepped in to assure me it would be alright, and we would get through. Which of course we would. But that night, feeling defeated, I said: “I know tomorrow we will make a new plan and move forward. But tonight – just for a short time – let me be crushed.”

At the property Mae and I were able to stay at was a book: The Worst-Case Scenario Survival Handbook. It was very helpful in providing a much-needed perspective that we were, in fact, not in the worst-case scenario. It also held interesting tidbits about how to fight an alligator, what to do in a hostage situation, how to land an airplane with an unconscious pilot, defence strategies for shark attacks, and so on.

There was a section on how to survive a swarm of agitated bees (FYI: don’t go underwater, create as much distance as possible from the hive, and dislodge stingers as quickly as possible). The reason you want to remove stingers quickly is that the venom does not release into your body all at once, but rather over time. You also don’t just want to grab and pull them out like you might a large sliver, because applying pressure on the piece sticking outside of your body will squeeze it and release venom on the inside. So instead, you want to scrape sideways along your skin with your nails or a tool like a credit card, removing the stinger closer to the skin.

So low and behold, our initial plans don’t work and we move back home with Covid spreading rampantly through our family. And eventually, my husband gets sick and is laid up in bed (thankfully it never gets too serious). I’m in the yard with symptom-free kids trying to entertain everyone without leaving the property, and my oldest says to me, “I’ve been stung by a bee.” He’s so calm and it’s a cool day at the start of April and I haven’t seen a bee this year, so I wave him away. But as he turns, I can see a huge stinger and kind of the butt of a bee sticking out of his NECK. (If you’ve seen Old School and the elephant tranquilizer dart scene, that is basically what I was looking at.)

She weird knowledge from this book jumps in my head, so I pull him into a headlock and scrape the stinger off with my nail as quickly as I can. And sure, it swelled up pretty bad, but all in all, I think we removed it more effectively and calmly than we would’ve if not for The Worst-Case Scenario Handbook. So while we still laugh about this – “Remember when you had that bee in your neck??” – it’s a fascinating instance of something coming full circle over our short time with Covid.

Day 25: Oscar and The Tests

I’ll start this short story by saying first THANK YOU to the health care workers and administrators and officials that are tirelessly working away in this never-will-end pandemic. We got to meet several of these heroes during our Covid adventure, particularly those on the front lines of the testing centres in our city.

And I’m betting all of them would pass on testing my six-year-old son Oscar again.

Here’s the thing. Oscar does not do well with things like eyeballs, ear canals, throats, nostrils, blood, people touching him, getting poked, pain, discomfort and any kind of ‘sit still’ directive.

His first Covid test went reasonably well (in hindsight insanely well). “Oh, that kind of hurt,” he said. “That was the worst dentist I’ve ever been to.”

A day later, thinking back on the test, he said, “You know, that was REALLY awful.” There was a bit more energy now as he mused about the test. He ruminated on it. He thought about it and then thought about it more. By the end of the day, in his mind, that nurse had jammed a dagger down his throat and scraped it around for an hour. He knew he would NEVER let that happen again.

As our adventure went on we ended up needing more testing. My husband took Oscar to the next round. How bad could it be? They returned home and Oscar was chatting about the ice cream sandwich he got to have after. But my husband’s eyes were welling up as he recounted the trauma. “I had to hold him down, screaming, tears flowing down his cheeks, and they did that one up the nostril. I feel like a Bad Dad. I am never, ever doing that again.”

A tad smug, I think about the many times I’ve taken our kids to get routine immunization shots and had to give them hugs while they naively sat on my lap, chattering away, until suddenly the needle plunged in and they looked at me and asked with their eyes: “Why did you bring me here and betray me like this?” Yes, I thought, welcome to being the bad guy.

I assure you all smugness dissipated rapidly when on the next Covid test, not only could I not bear the emotional horror of getting Oscar to comply with a nasal swab, I could physically not make it happen. He’s 6, but to be clear, he’s the same size as our not-small eight-year-old. Oscar is the kind of kid who does v-sits for fun, his kindergarten-back ripples with muscles, and his calves are the envy of professional dancers everywhere.

So, no, we didn’t do that test and Oscar completed a lengthy quarantine instead. A win-win for everyone (most especially the nurses who never had to see us again). 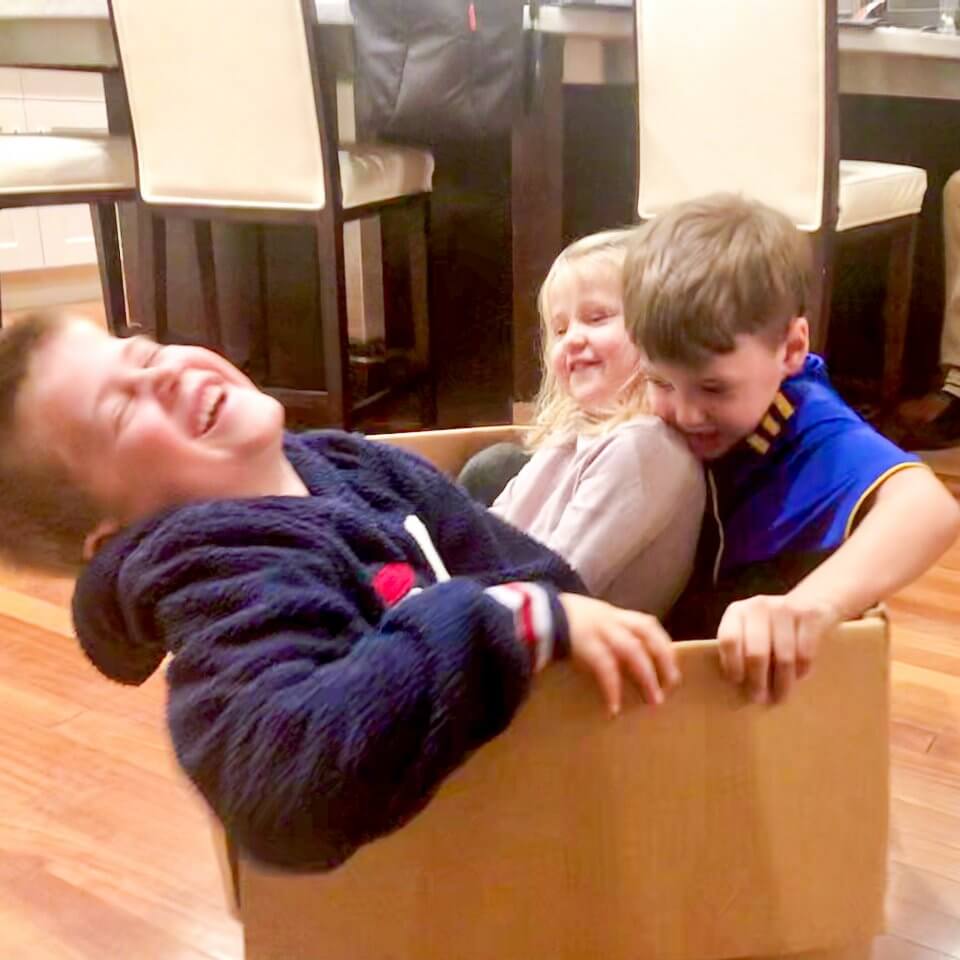 I asked a friend who kindly dropped a meal on our step one night what was happening outside of our quarantine/isolation house, and he said, “We’re basically living the same life as you anyways, except in addition to cooking for ourselves, we’re cooking for you too.”

And yup, with or without Covid, inside or outside of quarantine, we’re all stuck in a weird existence. But life just ticks on regardless of whether we’re waiting for quarantine to end or restrictions to lift or the world to self-right itself. Here are examples of how life carried on for our kids over those 29 days: 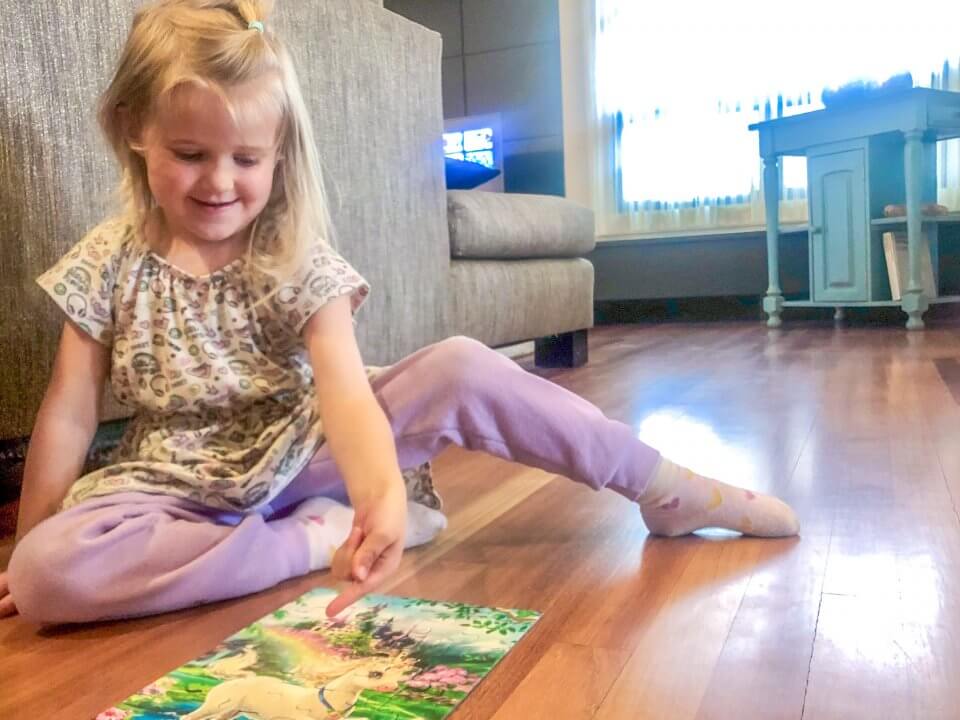 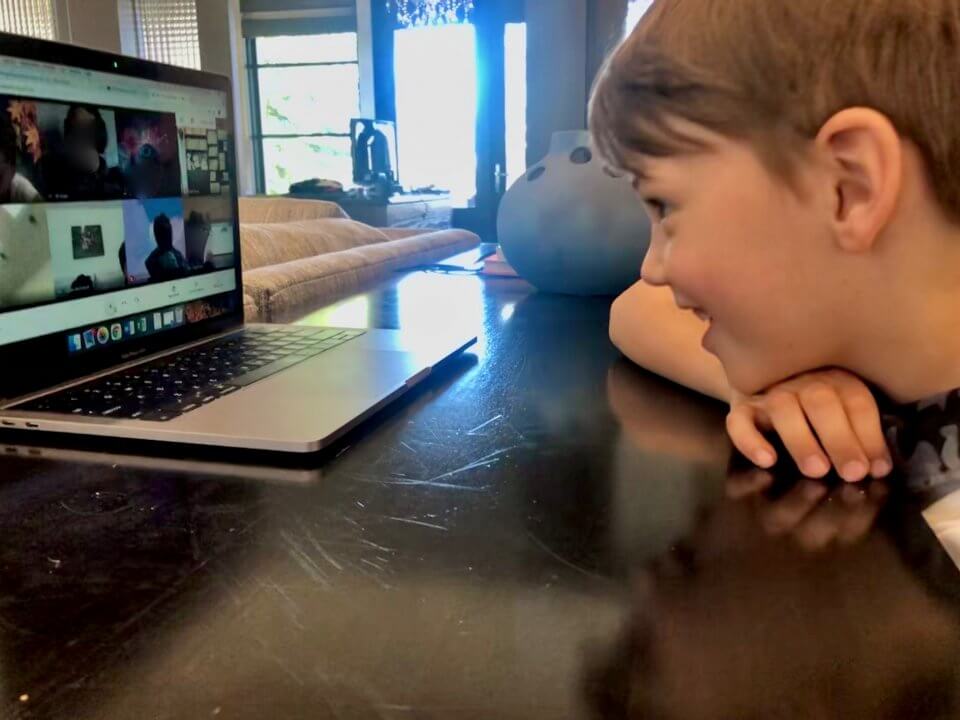 Melissa is a Kidco Mom living in Calgary. Her vision of what she would be like as a mom was shattered years ago when she discovered nothing ever goes as planned for parents, but laughter and community sees you through. You can reach her at msawatzky@kidsandcompany.com.

How to Set Our Children Up for a Bright Financial Future
A New Year, A New Sleep Routine: Tips for Healthy Sleep Habits
Emptying the Emotional Backpack: What to do when children get home from school

One thought on “29 Days of Quarantine”