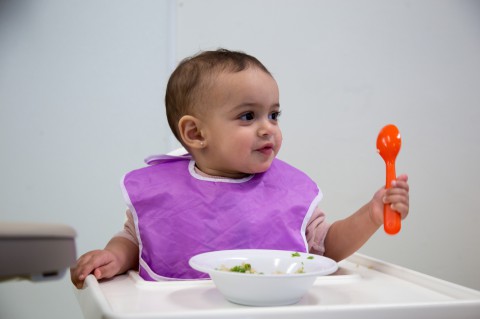 Up until your child is nine months old they most likely aren’t ready for finger foods and will be eating baby food, but around that age the child will usually want to become more involved with what she eats and what she does not, which is a blessing but also a curse. Yes, there will be food all over your floor at first once she begins feeding herself. But it’s important to keep in mind that she’ll only learn, like anyone, through practice and eventually get most and all of the food in her mouth! The signs that your child is ready for this transition are that she can sit without your assistance, wants to try and feed herself, she can pick up objects by gripping them between her thumb and other fingers, and can mash food with her gums. If you are seeing these signs in your child then it is probably a good time to try out finger foods.

The way to make it easy for her to make the transition you should start small…literally. Don’t give her pieces of food that she can’t swallow whole to ensure that she won’t choke and can simply mash it with her gums a bit before swallowing. Also, ease her into it by attempting a few pieces of a finger food during snack time at first and not for a full meal. If she shows signs of wanting more after the first few pieces then by all means give her more until she seems full and is no longer interested in eating! 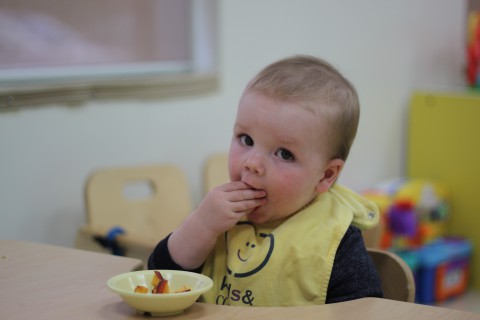 It is important to remember that her whole existence there has only been one texture that she has known as “food” so it could take her a while to warm up to different types of food, just keep trying and don’t get frustrated if she’s not responding in the way you’d hoped. The foods you’ll want to give her will be very soft like very well cooked and ground turkey and beef meats or small cubes of tofu. Some other foods you can try include: scrambled eggs, cooked and chopped pieces of broccoli, carrots, peas, beets and butternut squash, cooked, cut up pasta and noodles, rice, couscous, any grain, pieces of toast and chopped up pieces of fruit. Your blender and food processor will be your go to texture modifiers.  Most importantly, though is what not to give her any food that could be a choking hazard or something that you have not tried before that could be a potential allergen food and remember always consult your doctor.

Now you’re prepared to help your child take on one of their first, and definitely not their last, transition!

Super Bowl Sunday with your Little One!
Shopping Day is Just Around the Corner!
Keep Warm with this Winter Soup!