Tips and Tricks of Potty Training!

I can’t say potty training was my favourite part of parenting.  My dislike for potty training had little to do with the “accidents” that occurred, the feeling of being trapped in a house, or the actual acts of the training process, but all to do with the constant feeling of pressure to have my child out of diapers.  In chatting with other moms, there was always the age comparison of who is still in diapers, or the shocking tone in the “You haven’t started training yet?” question.  I really was in no rush at all to have my child out of diapers and was trying to live under the theory that I will start to worry when they start Kindergarten and still can’t go to the bathroom on their own.  Once I finally took this approach, everything just became a whole lot easier, and way more relaxed.

We have three children, our first a boy and then two girls, and in they all trained a little bit differently, but with some constants we used for all of them.  Our oldest son was fully trained by around 3, and the girls were just ‘into it’ earlier (probably wanting to be just like their older brother), and were day trained by about 2 ½ .  What I really learned from all of them is that the process is a whole lot easier when they are ready to be trained. 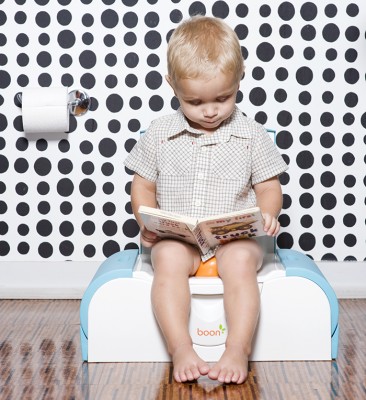 I know of so many successful stories from people who have used Elimination Communication and had babies trained at 12 months, to starting at a pre-decided, appropriate age, or waiting until their child indicates interest.  Although each one of these is successful for different families, when it came down to it I chose to wait until my children had an obvious interest.   It was also super helpful to know that our daycare was fully on board with helping to potty train and was probably a big part in why my children became much more interested in doing what the other kiddos in the class were doing.

I ended up using mainly the potty seat (on the toilet) for our son, where the girls loved using the cute little portable potty.  Our son found it easier to sit directly on the toilet with the comfy potty seat attached.  This made it a bit easier to transition straight to the toilet as he got bigger, along with his desire to be “just like mom and dad.” The girls, on the other hand, thought the potty was great, with its own little area for toilet paper, wipes, and creams.  In fact they would often drag it into the TV room to watch a show and pee at the same time.  This made for guaranteed success, which is what I was really looking for.

Reward them!  This is actually a huge life accomplishment for them, and they totally and completely deserve to be rewarded.  I changed the rewards with each child as they are all encouraged differently.  I used stickers, wrapped presents, dollar store treats, smarties…. and some pretty heartfelt family songs and dances!

There are so many different approaches here.  I had friends who sat their child on the potty every 15 minutes where you pretty much guarantee success at some point during the day.  Others would put their child on the potty first thing in the morning and “hang out there” reading books, playing games on the iPad, singing songs until something inevitably happened.  And others would do a variation of both throughout the day, while making sure to have their child drink a lot of water.  What was really important was that the potty was something that was visited all day on a regular basis.  The more successful situations I created, the more success, rewards and potty dances I did!!

I opted for underwear for most of the day, and pull-ups at night. I made a big deal of going to the store and letting them pick out their own undies: Dora, Cars, Minnie Mouse, Princess… whatever they wanted, they got to pick them out.  They were excited to wear “big kid” undies and didn’t really want to pee on Belle.  Only time we didn’t use undies during the day was when we were going to be going out for a bit and I didn’t want someone to have an accident outside of home where they would have to walk around in wet pants.

And… if worse comes to worst, just fill the toilet with cheerios and have them aim to sink the Cheerio battleships!  Peeing is way more fun when it’s a game, right??

Creating “Yes Spaces” for Children
Emptying the Emotional Backpack: What to do when children get home from school
Picky Eating: How to avoid it and what to do about it